Merkel and Myrtle did not know anything about Georgia Germein before attending her Adelaide Fringe performance and Bliss Organic Garden Café. Merkel was attracted to this performance because of the venue. Bliss is an organic Café with a good hippie vibe to it and a number of exotic flavoured hot chocolates. The venue struggled a bit as a performance venue. The Garden was a little small for group of Georgia fans and staff struggled to keep up with food service before the show.

Georgia Germain was a star though. She has mastered guitars, keyboards, vocals and songwriting and still presents as an engaging teenager. She draws on unexpectedly deep experiences in Nepal, the Kalahari and Ethiopia and seems comfortable in front of an audience. She shared the limelight with a couple of friends who joined in on a couple of songs helping to give some variation to the instrumentation but in truth this was a solo performance as Georgia's star shone brightly with the strong support of her family. 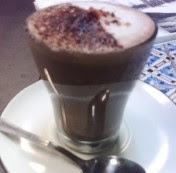 Merkel had the "wicked" hot chocolate which was flavoured with cardamom and chilli. It was present in glass with a wire handle and was finished with a froth a semicircle of chocolate powder and some chilli flakes. This was a good taste and cost $4.50. The service was slow and Bliss forgot Merkel's order once and Myrtle's twice.