This is a comfortable breakfast and lunch place in Malvern offering a swiss hot chocolate and a hot chocolate on the menu. The swiss hot chocolate was $3.80 and came in a glass mug with a handle. Two marshmallows (white and pink) were provided. This is the first Swiss hot chocolate I have reviewed. It is not as dark and rich as some hot chocolates but was creamy and had a malt taste. After some research I learn apparently it is not a malt additive but the way the chocolate is made. According to the Chocolate Alchemy Forum: 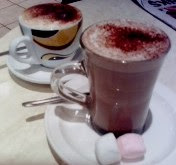 I have some Lindt chocolate flakes in my pantry and noticed that these also exhibit that Swiss chocolate malt or caramel taste. There are not many other Swiss hot chocolate venues in . It would seem that Alphütte does a "Mountaineers Hot Chocolate". Like a mountaineer Merkel will have to visit Alphütte "because it is there".