Cibo now has 5 shops in the Adelaide CBD and a further 10 shops in the suburbs. Merkel attend the Prospect outlet which is on the corner of Prospect Road and Vine Street in the same block of shops as Café Komodo and Muratti. There is plenty of seating inside and outside on the block off area of Vine Street. Inside, Cibo used its wall space to exhibit the colourful artwork of Mark Lobert. Cibo has continued its commitment from the Fringe and SALA to show artwork all year round. 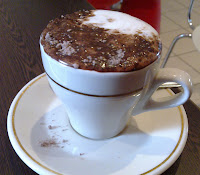 Merkel was looking forward to another Cioccolato Italiana. Unfortunately their machine was on the blink so Merkel had to settle for their standard hot chocolate. It came with a white froth and liberal chocolate powder on top in a fairly small cup. It was not as rich as Merkel would have expected given they said they would make it strong to compensate for the lack the Cioccolato Italiana.